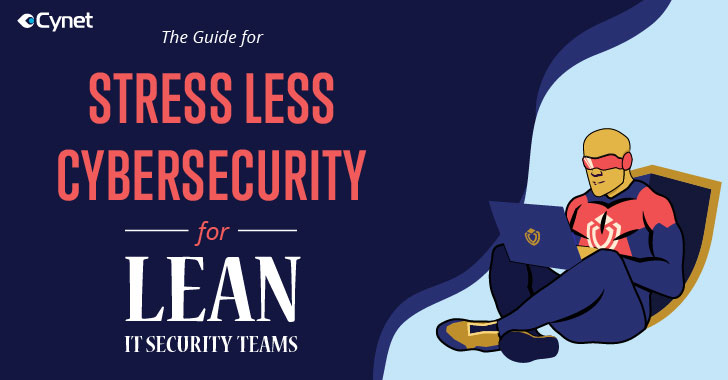 Today’s cybersecurity landscape is enough to make any security team concerned. The rapid evolution and increased danger of attack tactics have put even the largest corporations and governments at heightened risk. If the most elite security teams can’t prevent these attacks from happening, what can lean security teams look forward to?

Surprisingly, leaner teams have a much greater chance than they think. It might seem counterintuitive, but recent history has shown that large numbers and huge budgets aren’t the difference-makers they once were. Indeed, having the right strategy in place is a clear indicator of an organization’s success today.

A new guide by XDR provider Cynet (download it here) looks to dispel the myth that bigger is always better and shows a smarter way forward for lean IT security teams.

The new guide focuses on helping lean IT security teams plan strategies that can protect their organizations while reducing the level of stress they face. Due to the rise of cyber tools that can help level the playing field and a new generation of security professionals, smaller organizations can now defend their organizations equally. However, it’s not just about tools, but about how they’re deployed.

Putting the pieces together

The question is how organizations can put together these six components into a strategy that doesn’t just help them survive but stay ahead of potential threats and attackers. The guide argues that it begins with a combination of good planning and having the right tools in place.

Instead of having to update security definitions manually and constantly being behind the eight-ball in terms of prevention, recent technologies such as next-generation antivirus (NGAV) software can give organizations greater visibility and help automate detection and initial response. This reduces the time it takes to get up to speed, and lets organizations be proactive.

However, even with fewer alerts, it’s still important to separate the noise from the real alarms. Older technologies don’t offer these capabilities and left massive blind spots because they weren’t collecting data from every potential source (files, users, networks, and hosts). Instead, they left security teams to put together the pieces as best they could.

Adding correlation abilities with platforms such as extended detection and response (XDR) can help connect these dots and provide a much better picture of the threat landscape. Instead of having to put the pieces together manually, XDR tools can gather all the data from relevant sources and analyze it in a unified way, producing more actionable intelligence for better results.

With the ability to correlate data in hand, lean security teams can better investigate issues.

However, even here, new tools are making the process easier and less stressful. For instance, new XDR tools offer automated investigation and response, which allows them to look not just at an incident, but at the sequence of events, alerts, and anomalous behavior that led to it.

This offers a much better path to the final step, remediation. Here again, automation offers much faster response times, better outcomes, and easier resolutions. More importantly, by adding things like fully integrated managed detection and response (MDR), organizations can focus on the critical tasks knowing that they have a team of experts supporting them.

You can learn more about how lean security teams can build stress-less security strategies here.

Another ‘algorithmic’ stablecoin has fallen below its $1 peg — but experts say it’s not ‘Terra 2.0’
Apple To Introduce SMS Filter Extension With 12 Sub-Categories in India; Allows Back Up Over LTE Connection: Report
Apple Back to School 2022 Sale: Discounts on iPad Air, MacBook Pro, AirPods, More in India
New Xiaomi Smartwatch Tipped to Launch Without eSIM Support, Spotted on China 3C Website: Report
ESA’s MARSIS Gets Software Upgrade 19 Years After Its Launch, Mars Exploration Said to Get More Efficient