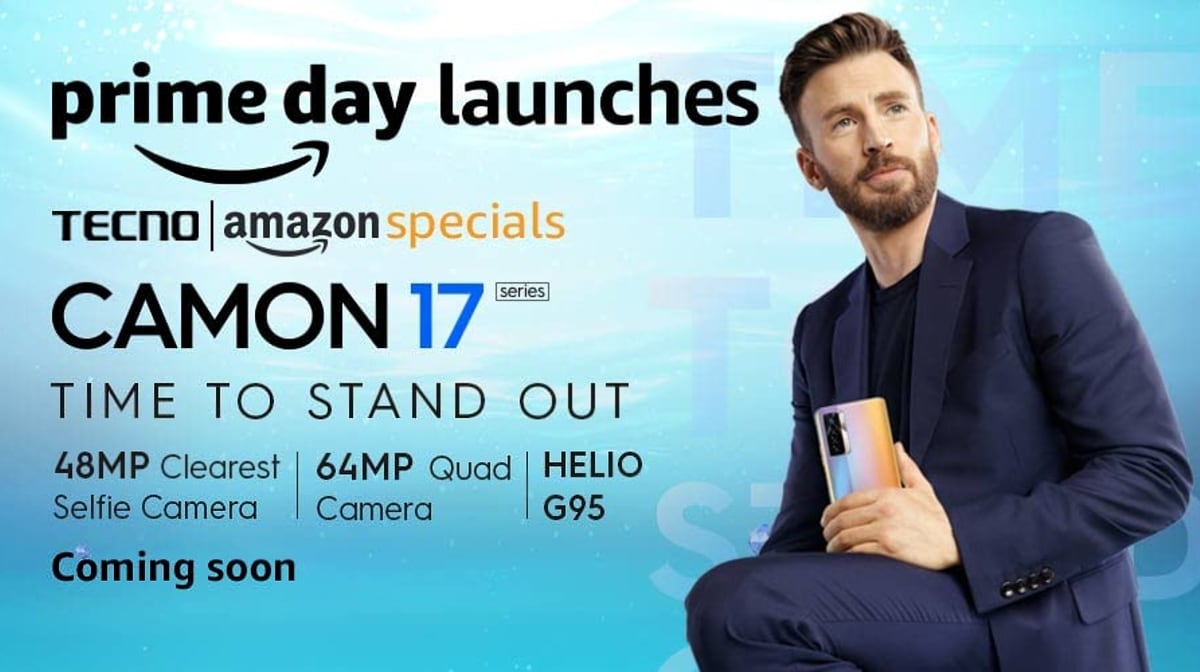 Tecno Camon 17 series has been teased to launch in India soon. The company has listed a dedicated teaser page on Amazon, confirming its availability on the e-commerce platform as well. The teasers suggest that the company may announce the Tecno Camon 17 Pro and Tecno Camon 17 phones in India. These phones were first unveiled in Nigeria in May this year and are now all set to launch in the Indian market. Tecno Camon 17 Pro is powered by the MediaTek Helio G95 SoC and has a 48-megapixel selfie camera. It also includes a quad rear camera setup, headlined by a 64-megapixel main sensor.

The Amazon teaser page confirms the arrival of Tecno Camon 17 Pro and Tecno Camon 17 phones in India. The teaser page has tagged the series as a ‘Prime Day’ launch, hinting that the phone will be available from July 26 onwards. This means that an official launch could happen before the Prime Day sales begin, or on the same day. An exact launch date has not been announced by Tecno yet.

Amazon teases 8GB + 128GB storage configuration for the series, likely for the Tecno Camon 17 Pro model. Tecno Camon 17 should see more RAM + storage configurations. Official pricing and availability of the phones will be announced by Tecno during its launch event. Launch offers will include 10 percent instant discount on HDFC debit and credit cards, including EMI transactions.

Tecno Camon 17 Pro features a 6.8-inch full-HD+ (1080×2469 pixels) display with 90Hz screen refresh rate. The phone is powered by the MediaTek Helio G95 SoC. It has a quad rear camera setup that includes a 64-megapixel main sensor, an 8-megapixel wide-angle camera, a 2-megapixel bokeh lens, and a 2-megapixel monochrome sensor. At the front, the phone has a 48-megapixel ultra-clear selfie camera. Tecno Camon 17 Pro packs a 5,000mAh battery with 33W fast charging support. There is a side-mounted fingerprint sensor and dual speakers on board.

Tecno Camon 17 features a smaller 6.6-inch HD+ (720×1,600) display with 90Hz screen refresh rate. It is powered by the MediaTek Helio G85 SoC, paired with 6GB RAM and 128GB storage. Tecno Camon 17 has a triple rear camera setup with a 48-megapixel main camera, a 2-megapixel bokeh lens, and an AI sensor. At the front, the phone has a 16-megapixel selfie camera. Tecno Camon 17 packs a 5,000mAh battery with 18W fast charging support. It has a rear-mounted fingerprint sensor.