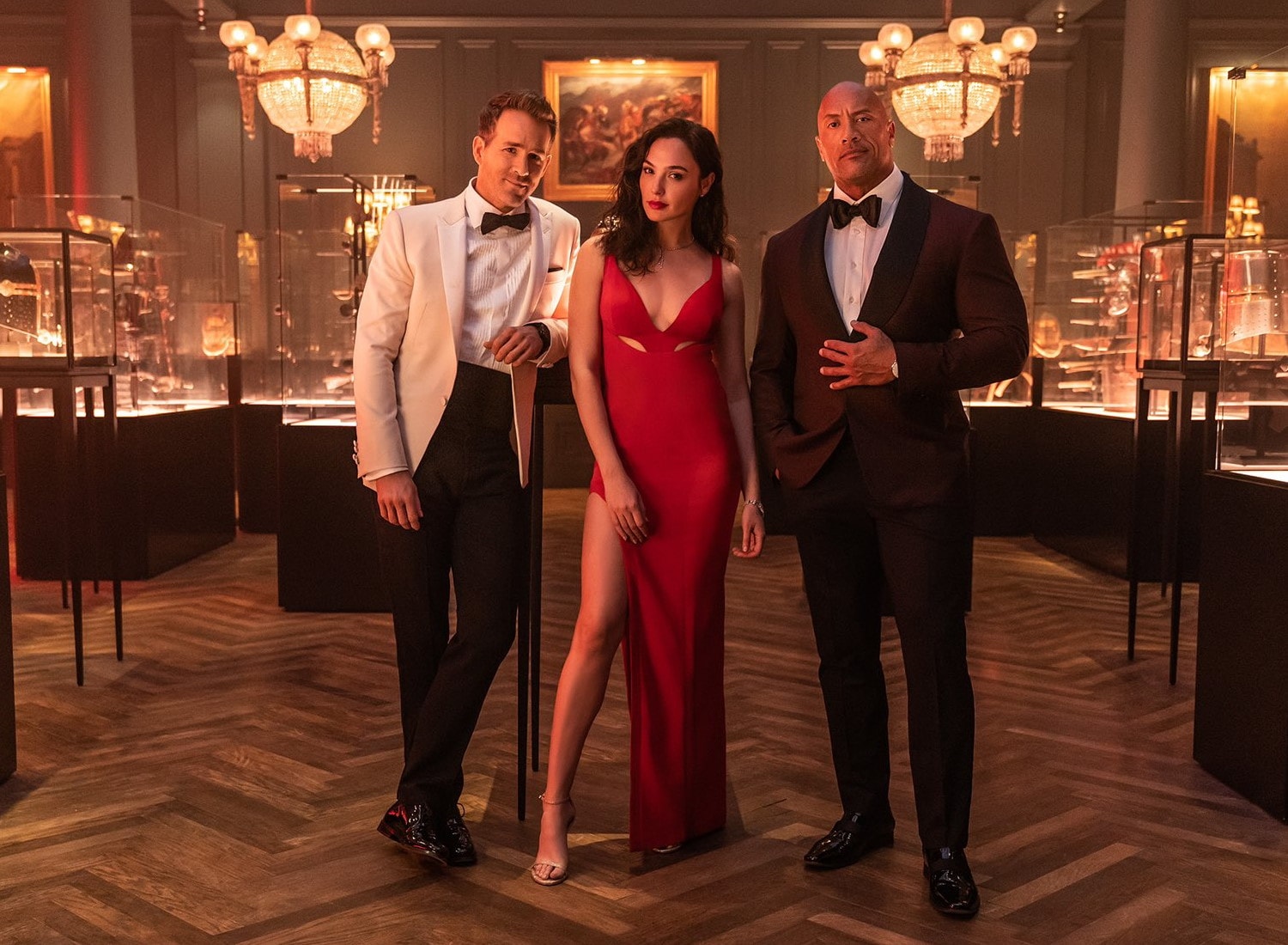 Red Notice — the Netflix action movie with Dwayne Johnson, Gal Gadot, and Ryan Reynolds — now has a release date: November 12. Johnson shared a first look Thursday evening on his Twitter account, which shows the three leads all dressed up and ready to go. Reynolds and Johnson appear in tuxedos, with Gadot in a red dress that is screaming femme fatale. In Red Notice, Gadot is the world’s most wanted art thief, Reynolds is the world’s greatest con artist, and Johnson is the FBI’s top profiler and the world’s greatest tracker. Rawson Marshall Thurber (Skyscraper, We’re the Millers) is the director and writer.

“You’re officially on notice. Netflix’s biggest movie ever #RedNotice premieres in your living rooms around the globe on Nov. 12,” Johnson wrote in his tweet. Reynolds followed up minutes later with a characteristic caption: “True story. They made my entire tuxedo out of one of The Rock’s socks. Also, true… #RedNotice has a release date of Nov. 12th on Netflix. Last piece of gossip: Gal Gadot is wonderful.” An hour or so later, Gadot chimed in with her own tweet: “I can’t wait for you to see this. Thank you Rawson Thurber for bringing me onto this project. Being able to work with my friends Ryan Reynolds & The Rock was the icing on the cake.”

Here’s the official synopsis for Red Notice from Netflix:

An Interpol-issued Red Notice is a global alert to hunt and capture the world’s most wanted. But when a daring heist brings together the FBI’s top profiler (Johnson) and two rival criminals (Gadot, Reynolds), there’s no telling what will happen.

Red Notice is out November 12 on Netflix in India and around the world. It is one of Netflix’s most expensive movies with an estimated budget of $200 million (roughly Rs. 1,492 crores).

It’s Google I/O time this week on Orbital, the Gadgets 360 podcast, as we discuss Android 12, Wear OS, and more. Later (starting at 27:29), we jump over to Army of the Dead, Zack Snyder’s Netflix zombie heist movie. Orbital is available on Apple Podcasts, Google Podcasts, Spotify, Amazon Music and wherever you get your podcasts.

Akhil Arora covers entertainment for Gadgets 360, interviewing stars such as Christian Bale and Anurag Kashyap, covering series premieres, product and service launches across the globe, and looking at American blockbusters and Indian dramas from a global socio-political and feminist perspective. As a Rotten Tomatoes-certified film critic, Akhil has reviewed over 150 movies and TV shows in over half a decade at Gadgets 360. When he is not completely caught up with new film and TV releases, Akhil
…More