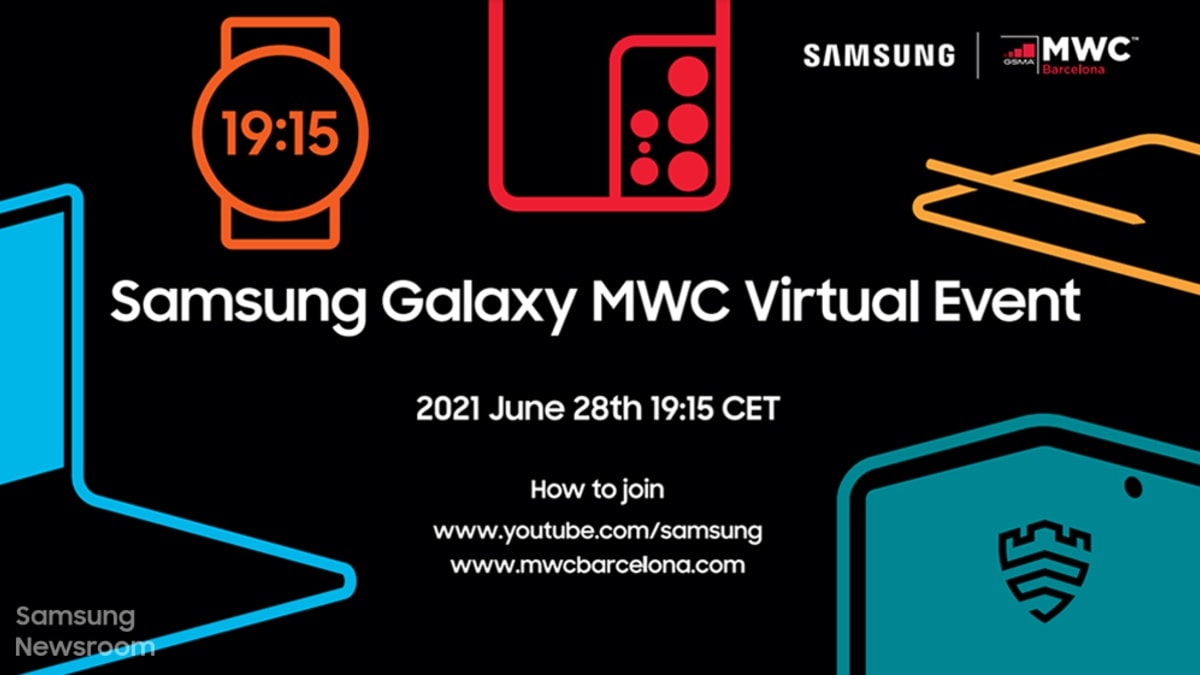 Samsung is hosting a virtual event at this year’s Mobile World Congress (MWC) on June 28. Although the exact details of what the South Korean giant would unveil at the forthcoming event are yet to be revealed, it has teased the announcement of its new devices. These could be Samsung’s new smartwatch, foldable phone, and tablet, as per a teaser released by the company on the Web. Samsung normally holds its dedicated ‘Galaxy Unpacked’ events to unveil its flagship devices. Nevertheless, we can expect the company to give us a glimpse of what we could see at its future ‘Unpacked’ events this year.

Called the Samsung Galaxy MWC Virtual Event, the online conference will take place at 07:15pm CET (10:45pm IST) on June 28. It will be livestreamed through Samsung’s official YouTube channel and the Samsung Newsroom site.

Samsung on Monday released the teaser on the Samsung Newsroom site to suggest what it could announce at the event. The teaser image carries silhouettes of a smartwatch, a foldable phone, and a tablet. It also appears to showcase the rear camera module of the Galaxy S21 Ultra as well as a logo of Samsung’s Knox security solution.

In addition to the teaser, Samsung suggested its new launches by saying that it would unveil “a vision for the future of smartwatches” at the event that “will provide new experiences for users and new opportunities for developers.” The company further noted that it “plans to present the latest technologies and innovation efforts” that could be around the “growing importance of smart device security”.

The company’s teaser and the description suggest we can expect some interesting developments to emerge from the virtual event. The announcements could include a new Wear OS experience that may have a mix of what Google initially announced at its I/O conference last month and Samsung’s proprietary One UI.

If we look at the rumour mill, Samsung is currently busy working on a number of hardware offerings. These include the Samsung Galaxy Z Fold 3 and Galaxy Z Flip 3 foldable phones, as well as the Galaxy Tab S8 family of tablets and Galaxy Watch 4 smartwatches. The new products are expected to debut at a Galaxy Unpacked event in August. However, Samsung may give us some information about them at its MWC 2021 conference next week.