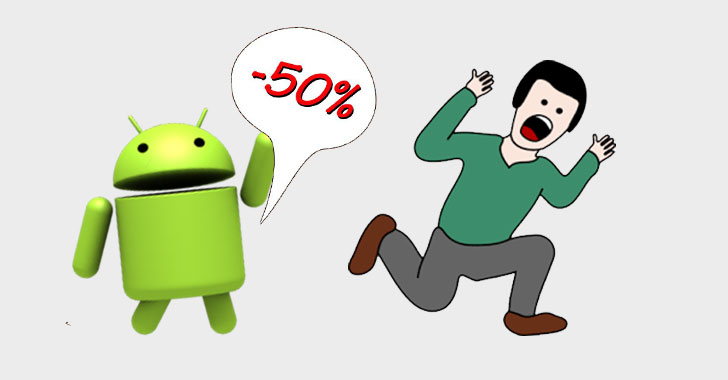 Google is tightening the privacy practices that could make it harder for apps on Android phones and tablets to track users who have opted out of receiving personalized interest-based ads. The change will go into effect sometime in late 2021.

The development, which mirrors Apple’s move to enable iPhone and iPad users to opt-out of ad tracking, was first reported by the Financial Times.

Once the revised policy goes live, Google is expected to completely cut off developers’ access to the so-called “Advertising IDs,” showing a “string of zeros” in its place. The Google Advertising ID (AAID), analogous to Apple’s IDFA, is a unique device identifier that can be used by app developers to track users as they move between apps to target ads better and measure the effectiveness of marketing campaigns.

“Starting in late 2021, when a user opts out of interest-based advertising or ads personalization, the advertising identifier will not be available,” Google said in a support document announcing the shift. “You will receive a string of zeros in place of the identifier.”

While Google already allows Android users to limit ad tracking and even manually reset the Advertising IDs as and when necessary, the identifiers are still put to use for non-advertising but essential use cases such as analytics and fraud detection. With this update, that’s changing. The search giant said it intends to provide an alternate solution in July to support such scenarios.

In the absence of advertising IDs, Google also recommends that app developers fall back to using a persistent or proprietary identifier as long as the data collection is spelled out in the apps’ privacy policy, and the amassed information is handled in accordance with the Developer Distribution Agreement, including all applicable privacy laws where the apps are made available. 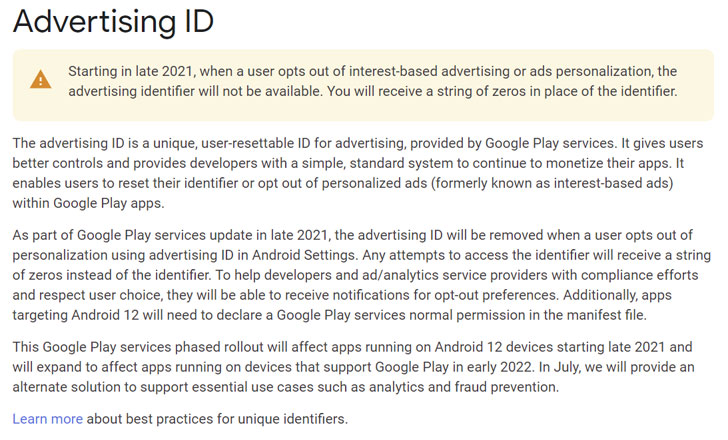 The change arrives hot on the heels of the company’s plans to add iOS-style privacy labels to app listings on the Play Store that highlight the various types of data being collected and how it’s used, in addition to limiting apps, with the exception of a few, from accessing the list of installed apps on devices.

The announcement also comes a little over a month after Apple turned the switch on App Tracking Transparency (ATT) in late April, a new privacy framework that requires users to opt in before apps can begin tracking them across other apps and websites using the device’s advertising identifier.

Google’s proposed solution also differs from ATT implementation-wise in that, unlike the latter, users won’t see an opt-in prompt for each app, nor will they have granular controls over each individual app’s ability to access their IDFA. Instead, it will let users opt-out completely of all tracking for all apps.

Another crucial distinction is that while Apple’s ATT is opt-in — i.e., tracking is off by default — the upcoming privacy protections outlined by Google are opt-out, potentially signaling that the company doesn’t want to go all-out nuclear on tracking over antitrust concerns.

It’s worth noting that Google’s Privacy Sandbox initiative to supplant third-party cookies in Chrome browser with FLoC and FLEDGE for privacy-preserving ad targeting is already in regulatory hot waters over concerns that “the proposals could cause advertising spend to become even more concentrated on Google’s ecosystem at the expense of its competitors.”

The opt-out is set to be available as an update to Google Play Services for Android 12 devices before gradually expanding to all other apps running on devices that support Google Play in early 2022.