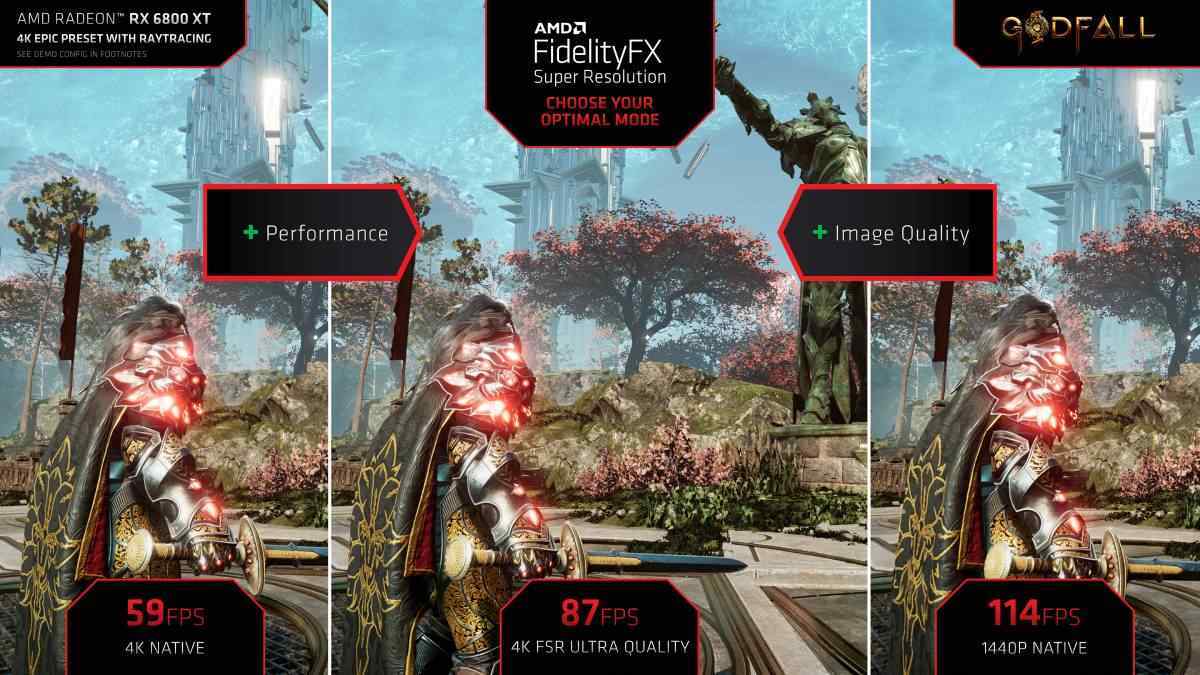 AMD’s FidelityFX Super Resolution upscaling feature for games will be available today, starting with seven games and expanding to another 12 in the near future. Fidelity FX Super Resolution (FSR) is AMD’s alternative to Nvidia’s Deep Learning Supersampling (DLSS) upscaling technology. Both work differently, but are intended to improve gaming performance by allowing games to be rendered at lower-than-native resolutions, reducing the strain on a GPU, and then upscaled to the desired native resolution without severely impacting visual quality. This is especially relevant when using hardware-intensive ray tracing visual effects.

According to AMD, its approach with FSR is based on open standards, and it will run on a wide range of hardware including desktop and laptop GPUs that are many generations old, and also GPUs integrated into CPUs. One interesting aspect of this technology is that it is vendor-agnostic and will run even on rival Nvidia’s current and previous-gen hardware. While DLSS is restricted to Nvidia’s premium GeForce RTX tier of GPUs, FSR is said to run even on older and lower-end GeForce GTX models. This could help extend the useful life of older hardware.

There are four FSR presets – Ultra Quality, Quality, Balanced, and Performance, each of which targets a different input resolution so that the target image is scaled by between 1.3X and 2X. AMD claims a 2.4X increase in frame rates on average at 4K in Performance mode. Game developers may tweak how FSR impacts sharpening in each game. AMD has also said it will continue to update and improve its algorithms.

Native image quality vs claimed compromises in each FSR mode

The seven games that will support FSR at launch time are: Godfall, Anno 1800, Terminator: Resistance, Kingshunt, 22 Racing Series, The Riftbreaker, and Evil Genius 2. Upcoming titles and ones that will soon be updated to support FSR include Far Cry 6, DOTA 2, Resident Evil Village, Myst, Baldur’s Gate 3, and Farming Simulator 22. In addition, a huge number of game developers and studios are on board, including EA, Ubisoft, Capcom, Warner Bros Games, Valve, Nixxes, and Crystal Dynamics.

AMD’s platform-agnostic open source push is significant, since the AMD’s RDNA2 GPU architecture powers the current-gen as well as previous-gen Xbox and PlayStation game consoles. It was recently announced that Samsung’s next-gen flagship Exynos SoC will also have an integrated RDNA2 graphics component, and Tesla’s latest in-cabin entertainment system will include an RDNA2-powered gaming platform . It is not known yet whether or how AMD’s hardware customers will implement this new feature.

FSR can be used on Windows and Linux, and supports the DirectX 11 and 12 as well as Vulkan APIs. Unlike DLSS, scaling is completely spatial and not temporal, which means it detects and reconstructs edges and textures but does not need to extrapolate data from previously generated frames. It also does not require per-game neural network training. AMD touts its developer-friendly approach and says they will need only minimal effort to integrate FSR into games.

AMD’s own performance figures show Godfall running at 59fps average at 4K on a Radeon RX 6800 XT GPU, and that increases to 87fps in Ultra Quality mode or up to 145fps in Performance mode. On a laptop with a Radeon RX 6800M GPU, the same game at 1440p ran at 66fps average without FSR, which jumped to between 84fps and 108fps depending on the FSR mode. As for the still-popular Nvidia GeForce GTX 1060, Kingshunt running at 1440p scaled from 71fps average without FSR to between 93fps and 131fps with this feature enabled.