Macrometa, an edge computing cloud and global data network for developers, today announced it has raised $20 million in a series A round led by Pelion Venture Partners. Sources report a post-money valuation of between $100 million and $500 million. The raise brings Macrometa’s total funding to date to $30 million and will be put toward expanding worldwide operations, cofounder and CEO Chetan Venkatesh says.

Demand for edge infrastructure is accelerating in a post-pandemic world. According to the most recent edition of the Linux Foundation’s annual State of the Edge report, companies are reprioritizing their digital transformation efforts to account for a more distributed workforce and a heightened need for automation. This could intensify the deployment of new technologies like wireless 5G and autonomous vehicles but will also impact nearly every sector of the economy, from industrial manufacturing to automation and health care. 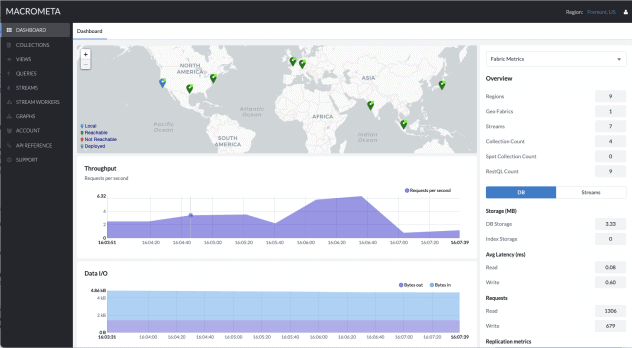 “Venkatesh and Gokina are veterans of several data infrastructure startups over the last 20 years and have worked together for close to a decade. They collaborated on building one of the industry’s first software-defined storage data accelerators at Chetan’s previous data storage startup, Atlantis Computing,” a spokesperson told VentureBeat via email. “Chetan, Durga, and a handful of early researchers and engineers spent several years researching and validating new data structures … and an approach using a technique called conflict-free replicated data types (CRDTs) for making copies of data for faster processing globally. This forms the basis for Macrometa’s cloud service.”

At its core, Macrometa’s architecture is a distributed event source with a view engine and replication. The network provides an adaptive model that allows developers to define consistency with granularity to achieve different levels of isolation, depending on their needs. Macrometa manages and merges changes made across the network to maintain a single version of the truth, responding to read and update requests while maintaining consistent views of data worldwide.

Macrometa asserts that it can improve latencies and scale elastically to meet “web-scale” apps’ demands, allowing reads and writes locally in all locations in parallel. The network doesn’t require a user to know which data should be placed in which location or redesign the whole schema every time they want to add or remove a location. Macrometa claims it can serve queries, reads, and writes to apps with less than 50 milliseconds of total round trip time from the client to an edge database and back.

“Today’s cloud architectures are too expensive and too slow to handle the real-time needs of enterprise fast data analytics. And therefore an architecture built on novel data structures might be needed to solve this … Macrometa’s edge cloud allows any cloud application to be run across hundreds of regional datacenters in parallel closer to sources of data and users and devices that run data-powered apps instead of in a far-away cloud region,” the spokesperson added. “Websites, ecommerce, and media and content customers use Macrometa to scale their applications with real-time data analytics to cope with increased demand and secular shifts in the consumption of their services at a fraction of scaling the same app in the cloud.”

Venkatesh says Macrometa, which employs around 61 people, has in the past year seen “significant” adoption from global enterprise clients, 5G telecom providers, and software-as-a-service and web services providers. In 2020, annual recurring revenue (ARR) was in the “single-digit millions,” and Venkatesh says it has increased 3 times in 2021.

“We started Macrometa with a deep conviction that today’s centralized hyperscale cloud architectures and platforms are not good enough to solve the challenges of a real time data-driven world,” Venkatesh told VentureBeat. “A new data architecture is needed to turn data into knowledge, insight, and wisdom instantly — an edge cloud. The world deserves a better cloud, an edge cloud for these new needs, and Macrometa is that new edge cloud.”

Nikola CEO on Supply Chain, Production
Twitter Working to Introduce Payments Feature Amid Drop in Advertising Income: Report
Lucid Takes On Tesla With New Electric Vehicle
Tesla Falls to a Session Low
Union Budget 2023-24: When and Where to Watch the Live Speech by FM Nirmala Sitharaman